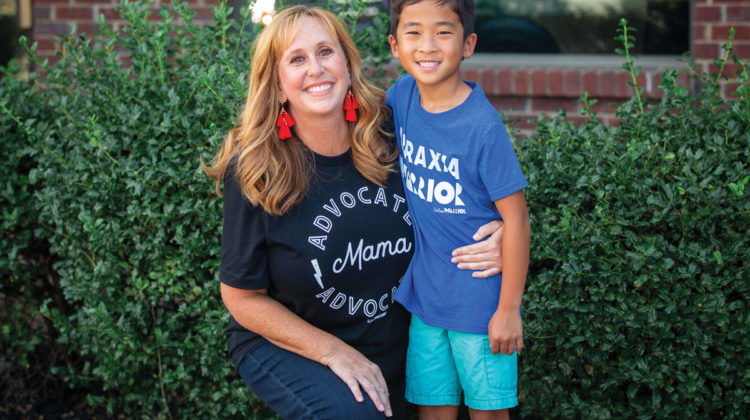 When Cathy White heard the diagnosis “apraxia” in regards to her two-and-a-half year old son Curtis, she felt overwhelmed. Like many people, White wasn’t even sure what Childhood Apraxia of Speech or CAS meant. Since that day over six years ago, she has vowed to change that for others. With so many aspects of the disability outside of her control, White believes advocacy is a way for her to help other families navigate the waters of CAS.

According to medical definition, CAS is a neurological disorder that affects the brain pathways involved in planning the sequence of movements involved in producing speech. In other words, the brain knows what it wants to say, but cannot properly plan and sequence the required speech sound movements. A child with CAS cannot communicate what they need or how they’re feeling, although the message is waiting. The frustrations felt between both the parent and the child are ones White can remember vividly.

“It’s hard to describe how emotional it is. You see your child, they are in tears, they can’t communicate with you. Imagine if you could not tell someone how you felt day after day after day,” White said.

When Curtis started kindergarten, White took brochures and information to the teachers, asking them to read about the disorder so they could better understand how he might struggle. She asked to meet with his teachers early in the school year to discuss his reading difficulties, inform them about the effects of CAS and start an open line of communication between school and home. According to White, it’s important to be proactive. One shouldn’t wait until parent teacher conferences roll around in October to address concerns.

After meeting with his teachers, White came up with a plan to raise awareness among Curtis’ classmates at Sutton Elementary School. She wrote a letter to send home to parents telling them about CAS and asking students in his class to wear blue to school on May 14 to honor Apraxia Awareness Day.

The next year, when Curtis was in second grade, the awareness grew to a school-wide event. When Curtis arrived to school that day, the marquee announced the special occasion and there was a sea of blue as the entire school dressed out in Curtis’ honor.

In 2019, White had the opportunity to attend the Apraxia Kids National conference in Pittsburgh. The event is the only major conference on the speech, language, learning and life needs of children with apraxia. This national conference brings together parents, professionals, educators and others who are seeking the most up-to-date and in-depth learning opportunity available. She knew that she not only wanted to attend, but that she had to bring others with her.

“There are not enough therapists trained specifically in apraxia,” White said. “I reached out to Curtis’ Speech Language Pathologists (SLP) both past and present and invited them to attend the conference too.”

The invitation was well received. Kristy Hampton from Wendell Foster, Jill Head from Hager Preschool, and Trina Prior and Jill Payne from Simply Therapy all joined the rest of the White family at the conference in Pittsburgh this past July.

“The Apraxia Kids staff was blown away that our little town had that many attendees there,” White said.

In addition to the wealth of information, Mikey Akers, founder of Mikey’s Wish was a special guest at the conference. Akers uses social media as a platform to inform his audience of what it was like growing up with apraxia. He is described by White as someone who will tell others exactly what it was like to struggle.

“There aren’t many teenagers for us parents to go to and hear what their story was like. When he writes I think: “That could be Curtis 10 years from now,” White said.

White wanted her son to meet Mikey because she knew he was coming in all the way from Great Britain. Akers has become an inspiration to her and she follows his story closely. Curtis was able to be introduced to Akers at the conference and get his picture taken with him.

“I see this 18-year-old boy being able to share with the world what he’s gone through, and I can’t help but think you know what? I can do that.” White said.

Advocate in Your Community

White knew that she wanted to start a support group for quite a while. In January 2019, that dream became a reality. According to her, most people aren’t in the right place early in the journey to immediately start advocating. It’s a process.

“Here we are six years into this journey,” White said. “The support group isn’t for me. It’s for the kids who are going to be diagnosed or are newly diagnosed; I don’t want others to feel as lost as I first did.”

White once knew just two other people in town that had apraxia. Now her group is up to 15 families who come from surrounding areas including Mclean County and Henderson. For now, the group is meeting mainly online. They have discussed having get togethers with their kids in the future.

“We know there are others. It’s just about them being able to hear about us,” White said.

Throughout her journey with her son Curtis, White has learned the importance of raising awareness. Last year, she took her son to a walk for apraxia in Jacksonville, Fla. after a vacation at Disney World.

“Curtis’ face lit up when they announced his name and he got the medal. It was worth our entire trip down there,” White said.

Curtis’ brother Leo carried a sign that read “We walk for our Rockstar Curtis.”

“We are so proud of Leo; he’s such a good little cheerleader for his brother,” White said.

Many students with CAS struggle in school and may battle multiple disorders. While they may not be recognized for making the honor roll or the highest test scores, White says it’s good for them to have special recognition for how hard they work outside of school to achieve what they do. She considers Curtis and his fellow Apraxia stars as extraordinary kids who make her proud.

Those moments solidified for White that she wanted to get their own walk started locally. Trina Pryor and Jill Payne of Simply Therapy shared the desire to bring this dream to fruition and became sponsors for the event. The 2019 Owensboro Walk for Apraxia was the first one in the state of Kentucky. White served as co-coordinator of the event alongside Pryor. The walk to raise CAS awareness took place at Moreland Park and has plans to become an annual event.

White believes that if one wants to see changes in their schools or communities, they are the ones that have to do the advocating. Her hope is that one day there won’t be anyone in Owensboro to say they have never heard of apraxia.

“I had to be Curtis’ voice for so long, but now he has his own,” she said. “I want him to be able to see his mom use her voice to make a difference, to make an impact. Maybe that will lead him to do the same.”