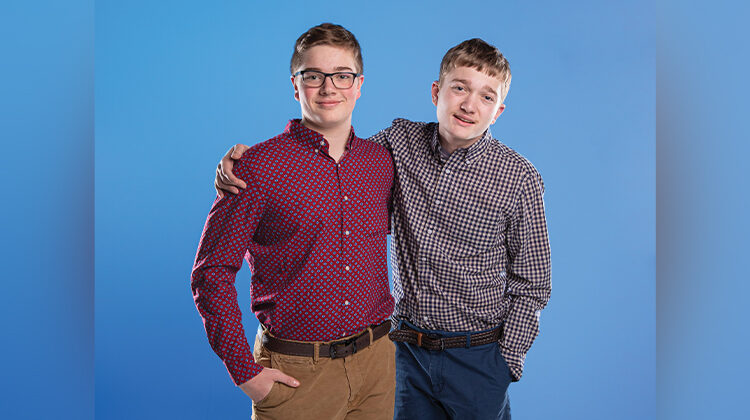 Trent Biever, a high school senior, has already overcome several obstacles in his life. His family has learned to face each challenge the same way – together.

When Trent was a baby, his mom describes him as a quiet baby. By the age of 3, just after his brother was born, everything changed quickly.

“At some point, there was a significant turn. He stopped sleeping, he was obsessed with spinning things like wheels and fans; we knew Trent was on the spectrum,” said his mom, Gina Biever.

During this time, Gina recalls not having as many supports in place compared to what is offered today. Autism, as she describes it, was not an easy road to navigate.

“His behavior started getting more serious. At that point I was a principal and my husband, Todd, was a teacher— maintaining busy schedules and trying to parent was stressful. Newborns are needy anyway, but we were also trying to work with Trent, who was more needy than a newborn,” Gina said.

By fourth grade, Trent was in crisis and ended up needing to be hospitalized, severely impacted by several comorbid conditions such as seizures, autism, diabetes, and behavior related disorders.

“He is one in 10 million. His doctors describe it as winning the lottery you don’t want to win,” Gina said.

One challenge the family has faced is recognizing that aspects of their life will always be different than what people consider normal, including the absence of certain experiences.

“People don’t consider how hard it can be—what you get to do that other parents don’t. For example, when I was assistant superintendent, I went to a graduation that was supposed to be Trent’s fifth grade graduation; I saw all the other kids he started kindergarten with, but he wasn’t there because I held him back a year,” she said.

The family has learned to make adjustments to outings based on what Trent can handle, often choosing to divide and conquer with one parent staying home and the other attending the event.

“Watching people get those firsts that Trent doesn’t get such as getting a driver’s license, going to certain dances, or trying to juggle a social life is tough,” Gina said. “One time we planned for him to have a babysitter while we attended a fundraiser and we had to cancel our plans at the last minute because the sitter got sick. Anytime we plan something, it can fall apart.”

Despite these challenges, the family says Trent helps make them who they are today.

“Todd and I both say we are better human beings, better husband and wife, better friends to each other and other people, because of Trent. He makes everybody better,” she said.

Gina describes her son as amazing, someone who has the gift of reading people.

“Some people are good at art, some are good at music, but Trent has a sense about people, it’s his super power,” she said.

Trent attends Puzzle Pieces where he has thrived, something his mom says she is very thankful for.

“People who are disabled or have different abilities, want opportunities, too. In many ways he is a normal 17-year-old boy— he wants to go to the movies, go out to eat. I already booked a limousine for prom,” she said.

Trent’s close relationship to his younger brother Zane is something he cherishes among the challenges that some might call a disability.

“Me and my brother are really close,” Zane said. “It’s hard to describe our relationship, but I’ve had to be there for him. I’m 14, he’s 18—I’m the younger brother, but it’s like I’m the bigger brother.”

Zane, who can be described is a typical teenager who excels at football and enjoys having lots of friends at school.

While Trent doesn’t attend many of his brother’s games because he struggles with being over stimulated, most nights the pair watch movies together, (Trent’s favorites are Jumanji or The Greatest Showman.)

“I watch him a lot. There’s not a lot we have in common, but he likes being with me. He will say I’m his best friend,” Zane said.

Trent is described as the family thermometer. If someone asks how they are doing on any given day, they say it circles back to him.

“One thing I always think about my brother – I hate that he has to go through this. But it’s how he was born, it’s how he was meant to me. I wouldn’t want him any other way. Just the way he is, I love him,” Zane said.