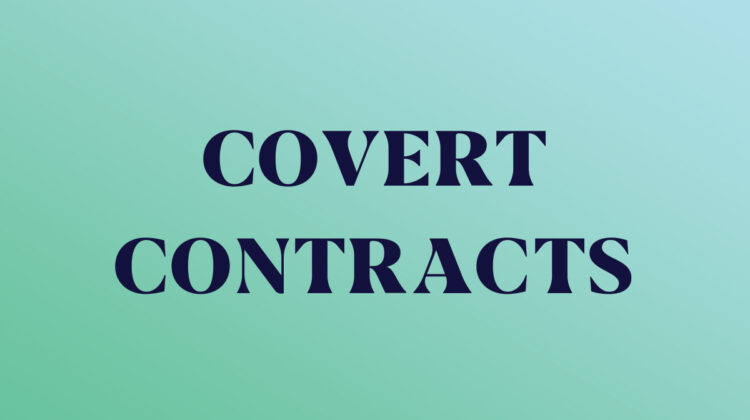 Angie comes home from working a double shift. She’s really tired and exhausted from her day. When she gets home, her teenage son is playing video games while the house is a mess with empty chip bags on the floor and soda cans about.

She feels the frustration building inside her.

She says, “What were you doing while I was working? Why didn’t you start supper and you could have at least done one load of laundry or started this dishwasher.”

He stares at her and doesn’t understand why she’s so upset. She never asked him to do any of those things today. He would have done those things if she had told him to do it. They both end up frustrated with each other and confused.

As a parent, have you ever experienced something similar? This is a covert contract. It is the idea that if I do X, then you’ll do Y, even though neither one of us has acknowledged it. The other person involved has no earthly idea this is happening. Covert contracts are agreements that you haven’t actually made but believe to be true. It is an unspoken agreement you have within your head between you and someone else. It’s what you expect someone to do based on what you do for them or the expectations you have of the relationship.

Angie assumed that when she had to work a double shift that her son was going to start supper and do some extra duties around the house. Her son didn’t know that this was an expectation that his mother had for him when she worked a double shift. When she came home and this internal expectation had not been met, she was upset with her son and he had no idea why.

You can take this imaginary scenario one step further. Angie’s son isn’t sure why his mom is so mad at him. She didn’t tell him that he had a list of chores to be done after school. He starts to think about what has happened in the last few days and he thinks maybe she’s mad because he got a B- on his science test. He tried really hard to get a good grade. Now he starts to feel really sad that he let his mom down.

This couldn’t be further from the real truth to this scenario, but a great example of how a covert contract can have negative impacts on a parent/child relationship. This example shows how covert contracts can create big problems and hurt feelings. Covert contracts are, by nature, difficult to see, so many parents have no idea it’s affecting their relationship with their partners, coworkers, and most importantly, children. We think we have set clear expectations and therefore we don’t need to revisit those.  Actually, the opposite is true. We need to go over our expectations many times because children are learning and they don’t know what they don’t know.

Here are some other examples of covert contracts in different settings.

Workplace – If I respond to your email quickly then you will do the same when I send you an email.

Parenting – If we do a fun craft activity together then you won’t get upset when it’s time to go to bed.

Friendships- If I am always on time for my friend’s events then they won’t ever be late to anything that I invite them to.

Once I learned about covert contracts, I started to see them everywhere. They can play a vital role in the wellbeing and/or destruction of a relationship. One of the best things we can do is to recognize when we are doing this because oftentimes we are unaware. Covert contracts often build up and build up until they implode into impossible situations that cause frustration on both sides.

You, as a parent, need to be clear with your expectations. It can take some vulnerability to be straightforward with your children too. In our opening scenario, Angie could have told her son that when she has to work a double shift she feels tired and she needs some extra help on those days. In order for her to do this she has to be open and vulnerable to admit that she needs help and she can’t do it all.

Covert contracts are unkind and unfair to you and your children. Open communication is the key to avoiding covert contracts. Don’t be afraid to talk and be open. To be clear is to be kind.

After all, we should all be in the business of building better humans.

What covert contracts have you observed? I would love to hear more from you. Reply to me at [email protected]