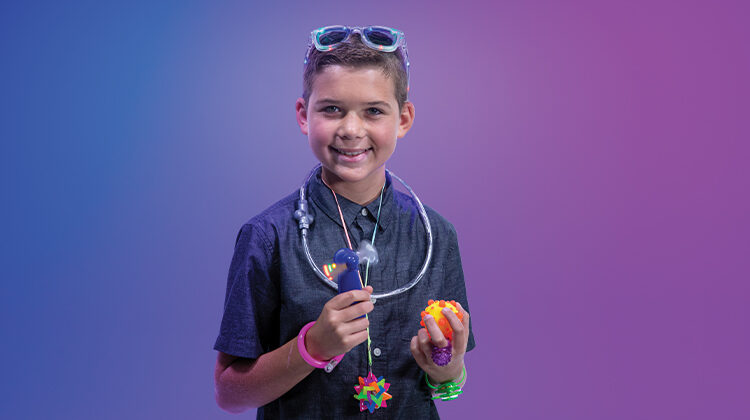 At just 11 years old, Jaxon Osborne has already found a way to positively impact his community. Last year, he started “Be the Light,” an initiative to provide light up toys for therapy patients at Wendell Foster.

One of eight children, Jaxon gained several siblings through foster and adoption.

“We have adopted three kids who have special needs. We went to Wendell Foster every Tuesday and Thursday, and due to COVID, we had to sit and wait in the parking lot,” Jaxon’s mom Maghan Osborne said.

As they were waiting in the car, Jaxon would watch the kids as they got out of their vehicles to be taken into therapy. Some days, he would notice a child having a difficult time.

“We’d be waiting out there two to three hours sometimes,” Maghan said. Jaxon would watch therapy patients get out of a van in a wheelchair, some wouldn’t want to go in without a parent. Even Lazarus, his 6-year-old brother, sometimes didn’t want to go in.”

This is when Jaxon had an idea. His empathy for other children would lead him to do something to make their day a little brighter.

“He asked one day if he could get something for them. I had bought Goldfish (crackers) for church and he asked if we could give them the Goldfish. I told him no, but that we could brainstorm,” Maghan said.

Jaxon was determined to find a way to make these kids smile before or after their therapy visits and he was willing to spend his own money to do it.

After deciding that light up toys was the way to go, Maghan told her son he would need to come up with a name for his endeavor and contact the CEO of Wendell Foster to ask for permission.

“He emailed Doug Hoyt to see if he could hand out the light up toys and he responded immediately that he loved the idea,” Maghan said.  “Jaxon bought $150 worth of light up toys with his own money and was ready to get started.”

When looking for what to call his outreach, Jaxon saw a landscaping truck one day that gave him an idea for the name—“Light Up the World.”

“It’s based on Matthew 5:15-16 ‘Be a light for all to see,’” Maghan said. “His sister made him a shirt and a tablecloth with his name on it so it looked professional.”

Jaxon started setting up his table one day a week at one of the two different therapy buildings at Wendell Foster and found immediate success.

“The therapists came out and talked to him; they were so excited about what he was doing.

On his biggest day, we were there for two hours and he handed out 17 toys,” Maghan said. 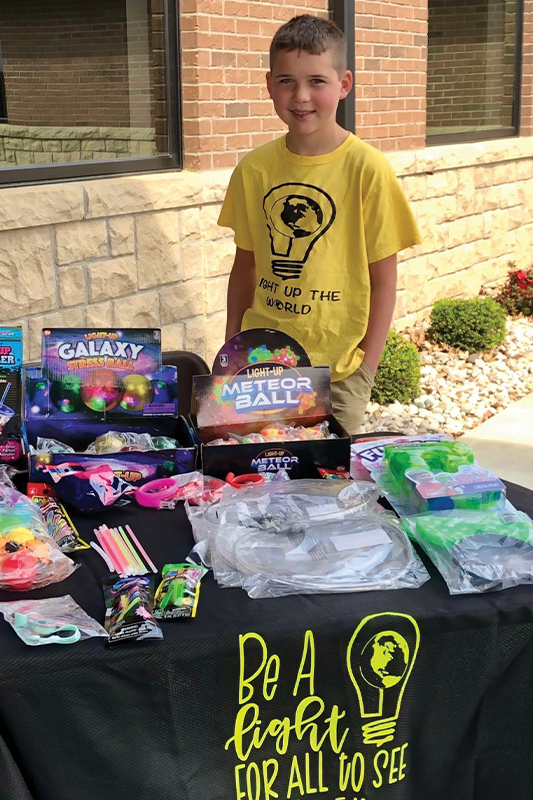 Some of the toys Jaxon purchased included rings, grabbers, headbands, balls, swords, bubble machines, and Mickey ears. Each child who came in to receive therapy could choose a toy.

“Anything we find that lights up, we pretty much get it,” Osborne said. “Now that he’s back in school, we take baskets rather than setting up in person.”

Even without Jaxon there to hand out the toys in person, Light Up the World is making sure to continue its mission of lighting up another person’s day.

“If a patient reaches a milestone and needs to be celebrated or is having a hard day and doesn’t want to come in, the toys are there,” Maghan said.

While several people have reached out about getting involved with purchasing toys, most of the time, Jaxon declines.

“He works for his money to buy these toys and he loves it,” Maghan said. “He enjoys getting online and filling up his cart.”

The sixth grade student at Heritage Christian School has been committed to his business for over a year.

“It has been a good opportunity for him to share with kids what he is doing to spread the message of kindness,” Maghan said.

Jaxon’s sister, Nevaeh, 15, has found a way to contribute to this cause as well.

“She has a Cricut and a heat press. She made all of us shirts that say ‘Light Up the World.’” Maghan said. “There’s a lightbulb and inside it is a globe in the middle– his scripture is on the back.”

After being there to help distribute the toys, his sister embraced the opportunity to support her brother’s vision.

“I wanted to get involved because I was seeing the joy it brought Jaxon to help the kids with their transition into therapy. I see how the toys can ease the transition and it made me want to be there and help with that transition,” Neveah said.

As far as Jaxon’s favorite part of “Light Up the World,” he loves bringing others joy and watching their reactions when they receive a toy.

“I like handing out the toys, a lot of them were happy to get them,” he said. “I would like to continue this in the future. It’s super fun getting interviews to be in the newspaper and stuff like that.”

As far as official future plans, “Light Up the World” would like to expand, but they are still taking it one day at a time.

“We have talked a little bit about expansion, making and selling shirts—but for now we will continue making baskets now that Jaxon is back in school,” Maghan said.

Giving back to his community is a way that Jaxon has learned to spread positivity and joy, a lesson he’s picked up at a young age.

“It’s awesome just to know that he did this on his own,” Maghan said. “And it all started with him wanting to give them Goldfish.”