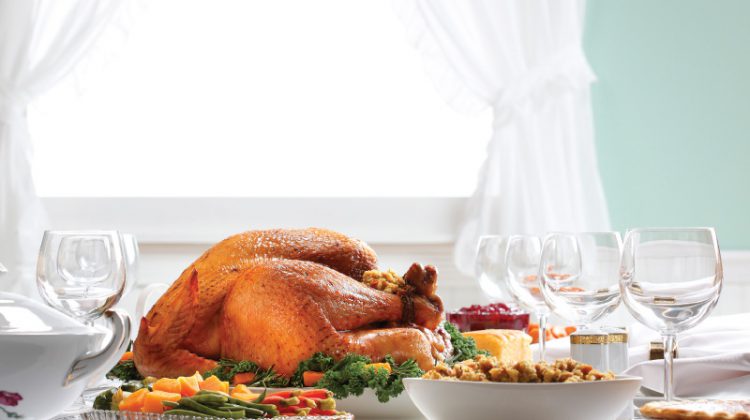 The huffiness has finally subsided following the conversations – discussions? debates? Well, maybe “arguments” is the right word after all – about who would host the family gathering this year.

And now you look around and wonder if it was worth it. Worth standing on the least-wobbly chair to get the good dishes off the top shelf of the cabinet. Worth washing and pressing a real cloth tablecloth – the old one, the one Grandmother used to use. Worth scrubbing two bathrooms, vacuuming the whole house and raking leaves from the yard.
And Thanksgiving is expensive. Of course, turkey is on sale – cheap – but that’s just to lure you in to buy the potatoes and green beans (don’t forget those crispy little onion things). You hesitated at the frozen food department; would anyone really care if the pumpkin pie wasn’t “from scratch”?

And that doesn’t count the new seasonal potholders and dish towels, or the cinnamon-scented air freshener that you can only hope is stronger than the litter box and your son’s gym shoes.

But now Thanksgiving is here.

And you look around.

Your teenaged nephew is slouched in the corner, sullen and silent, thumbs flying furiously as he texts his friends, no doubt trading “my fam is so lame im booored!” messages. And – is that a tattoo peeking out from under his sleeve?

You sure hope Grandma doesn’t see that, but she’s too busy noticing that the antique gravy boat has been chipped since last year. Just when she had almost gotten over the fact that the lid to the sugar bowl had been glued back together …

Your sisters – who had promised to help in the kitchen – are instead huddled over the sales flyers from the newspaper. Your tech-savvy big sis brought her latest techno-gadget and is scouring Black Friday websites in one window, while in another, she creates a master schedule that would rival that of D-Day for the big shopping trip to start at 0400 hours. At the moment, there is much chattering about how they can divide and conquer to take best advantage of the “early bird specials.”

The men are circled around the TV, but even this cluster is not necessarily a fraternal one.

Apparently some have not forgotten or forgiven Aaron Rodgers’ concussion from last year. Tensions are high, and you are glad you decided not to prepare a cheese tray for the guys to enjoy as a pre-meal snack. That might have been like throwing a can of gasoline on a fire.

The twins are chasing the cat through a forest of adult legs. The toddlers are momentarily corralled in the play pen, but it’s nap time for one, play time for another, and tears are imminent.
The new mother is nervously hovering over her baby as he is passed from relative to relative, trying in vain to prepare the way with squirts of hand sanitizer. One of the uncles protests loudly that “a little dirt is good for kids.” You cringe and look away; you don’t want to be called as a witness if she whacks him with the bottle.

Papaw has fallen asleep in the big chair – already? – and you realize you’ve been walking around with a corn casserole in your hands for 10 minutes, trying to figure out where to put it on an already overloaded table.

Your son tugs at your sleeve – nearly spilling the casserole to the floor – and loudly informs you that the toilet won’t flush. You tell him to close the bathroom door and then go find Daddy; you just realized your husband never did go out to the garage to bring in the card table and chairs, and for goodness’ sake, dust them off first!

Somehow – someway – everyone finally migrates to the dining room. The children are at the kids’ table, giggling and poking one another. Everyone pretends not to notice that two of the aunts have navigated so they are not sitting near one another. Papaw found his glasses (in his shirt pocket) and has taken his place at the head of the table.

There is an embarrassed clink at the end of the table where Uncle Jim had already picked up his fork, and everyone bows his head.

Except you. You are looking around at these people who come together only on occasions such as this. These people, your family.

And you are thankful.

By Lora Wimasatt. Lora Wimsatt is a mother, grandmother and writer. She enjoys the everyday blessings and adventures of life, especially her family.