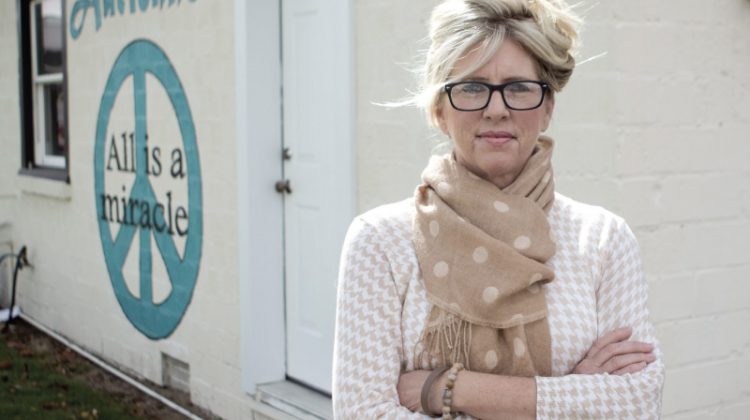 Owensboro is a small enough town that we don’t see homelessness as obviously as they do in bigger cities. But the sad truth is that Owensboro does have a large homeless population. In fact, the Daniel Pitino Shelter has a waiting list so long that they turn away almost 100 families a month. The Boulware Center also has a waiting list and St. Benedict’s Shelter is nearing capacity as the nights get colder.

It has become Kim Jagoe’s personal mission to help our homeless community. After years of volunteering at the Help Office and St. Benedict’s Shelter (where she was actually the director for three years), Jagoe has a vision to open a women’s shelter, resource center and a reverse soup kitchen called A Simple Path.

If you’re like me, you are asking yourself “What in the world is a reverse soup kitchen?” It starts by training some of the homeless community in culinary skills, nutrition and sanitation so they can prepare and serve meals. Customers come and eat, but instead of paying for a “bill,” they make a donation, which goes straight to the shelter.

Jagoe says the road to A Simple Path lead her to step down as director of St. Benedicts to enroll in the culinary arts program at Sullivan University in Louisville, where she received her certification as a personal private chef with the intention of opening the reverse soup kitchen.

Keith Lawrence with the Owensboro Messenger-Inquirer interviewed Kim just a few days after she completed the program. Kim was hesitant.

“I didn’t really want him to do the article at first because I wanted to get some more things in order before it went public,” Kim said. “But as it turned out, it was all in God’s plan because the day after the article ran, Michele Ison called and told me that Crossroads just received a grant to completely upgrade their kitchen and they needed someone to run it.”

Already established as a 501c3, Crossroads is a grassroots network of volunteers, programs and resources aimed at ending homelessness in Owensboro, so it made perfect sense to partner with A Simple Path.

Adrienne’s House
Adrienne’s House is named after Adrienne Courtney Dantin, a young woman who had a heart for the poor and worked for justice until she succumbed to cancer. Once the house is completed it will serve as both an emergency shelter and a transitional program to help residents get accepted into public housing. During the day Adrienne’s House will also serve as a resource center providing food, clothes and baby items to homeless and impoverished women and children.

Success Story
In all of Kim Jagoe’s years of working with the homeless community, one of her favorite success stories is about a young lady she met at St. Benedict’s Shelter that we’ll call “Karen.” The youngest of seven, Karen lost her mother when she was just two so she never really had the guidance of a maternal figure in her life. When Karen came to St. Benedict’s she was working at a fast food restaurant but she did not have a place of her own. She was also struggling with an addiction and did not attend church.

Jagoe recalls, “I would bring her to church with us and I would take her shopping or running errands with me during the day. She always wanted to do those things because she never really had those experiences growing up.”

Eventually the staff at St. Benedicts was able to help Karen get into public housing. Today, five years later, she still lives in that house, still has a job, regularly attends the same church she was baptized in and is drug free.

“When you’re helping the homeless community it’s all about consistency,” Jagoe explains. “When you show them a constant, non-judgmental, Christ-like environment then they learn to trust. They learn to change. At St. Benedicts our motto was ‘we want to love you like Jesus loves you.’ At A Simple Path we will have that same approach.”

With the help of many volunteers and a network of supporters, Kim Jagoe’s dream is that there will be many more people with success stories like Karen’s that have found a better life through A Simple Path.