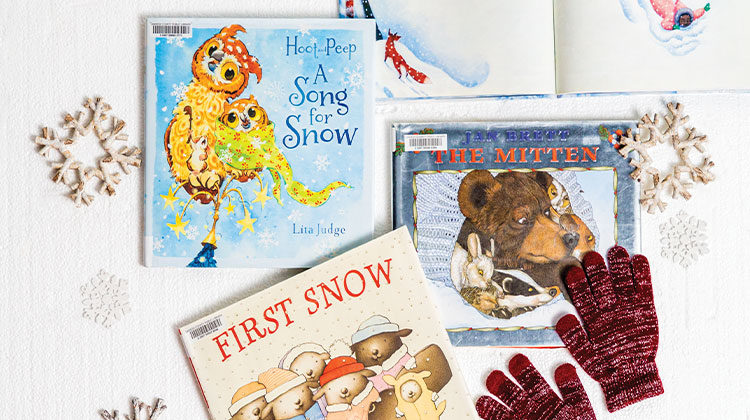 Hoot and Peep: A Song for Snow

It’s Peep’s first winter, and it’s going to snow very, very soon. Peep has so many questions for her older brother Hoot: Does snow drop, polppety splop, like the rain’s song? Does it scrinkle scrattle like falling leaves? But Hoot can’t remember snow very well. The one thing he knows for sure is that it is worth waiting for.

The Mitten: A Ukrainian Folktale

A Ukrainian boy named Nicki wants his grandmother Baba to knit snow-white mittens for him. She warns her grandson that a white mitten will be hard to find if he loses it in the snow, but of course he promptly does just that! What happens next is the surprising part, as a mole takes refuge in the lost mitten, then a rabbit, then a hedgehog, an owl, a badger, and a fox.

In this gentle picture book fantasy, a child’s world transforms through his hard work, imagination, and persistence when he opens the door and steps outside, into to the brave new world of his imagination.

It’s a day of firsts for Pedro…. First snowfall. First snow angel. First taste of a snowflake. First sled run. First snowball fight! All the joy, magic, and wonder of a child’s first experiences are captured in this breathtaking picture book.

All of these books are available for check out at the Daviess County Public Library.