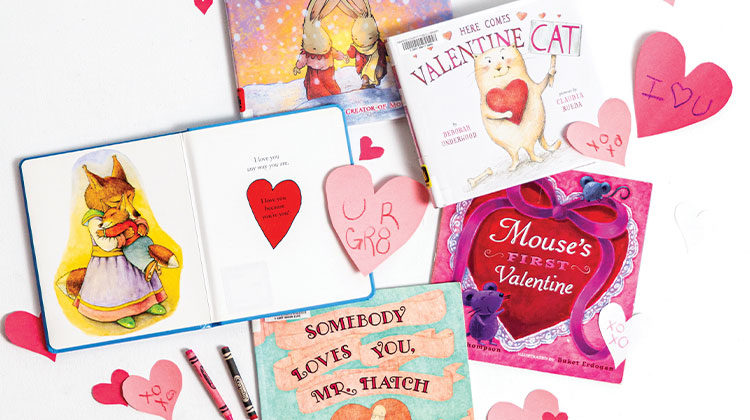 I Love You Because You’re You

In a poem about a Mama Fox’s love for her cub, I Love You Because You’re You captures the many moods of all children, reassuring them of their parents’ abiding affection and approval. This book is sure to become a family favorite—and an enduring classic of the genre.

Cat does NOT like Valentine’s Day. It’s much too mushy, and no way is he making anyone a valentine—especially not his new neighbor, Dog. Dog refuses to respect the fence. He keeps tossing over old bones and hitting Cat in the head! But just as Cat’s about to send Dog an angry “valentine” telling him exactly what he can do with his bones, Dog throws a ball over the fence. What is Dog playing at?

Step out into a snowy Valentine’s Day with Jasper the bunny as he searches the forest valley for a special gift for his loved one. In his picture-book debut, David Petersen, the Eisner Award-winning creator of Mouse Guard, tells a delightful tale that becomes the perfect way to say “I love you.”

What will it be?

Somebody Loves You, Mr. Hatch

One wintry day, a postman delivers a mysterious package with a big pink bow to a lonely man named Mr. Hatch. “Somebody loves you” the note says. After some time, Mr. Hatch discovers just who his secret admirer is and, in doing so, enjoys the biggest surprise of his life!

All of these books are available for check out at the Daviess County Public Library.