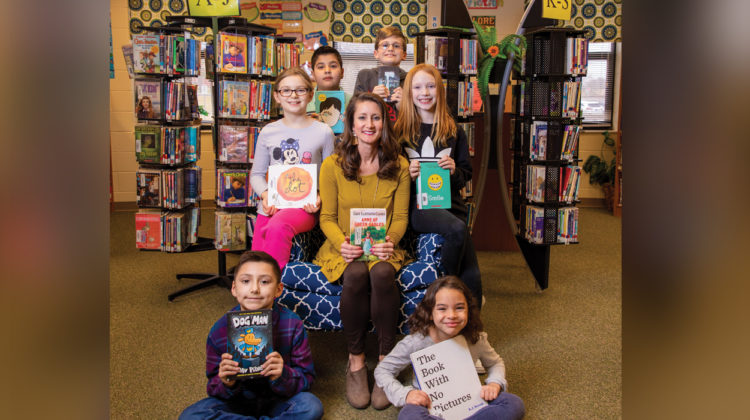 For this issue’s Book Nook, students at Meadow Lands Elementary School voted for their favorite book. Library Media Specialist Brittney Dukes tallied the votes and shared with Owensboro Parent each grade’s top choice, and even threw in her favorite read too!

The Book With No Pictures

You might think a book with no pictures seems boring and serious. Except . . . here’s how books work. Everything written on the page has to be said by the person reading it aloud. Even if the words say . . . BLORK. Or BLUURF. Even if the words are a preposterous song about eating ants for breakfast, or just a list of astonishingly goofy sounds like BLAGGITY BLAGGITY and GLIBBITY GLOBBITY.

Vashti is in a very bad mood because she has not managed to produce anything in her art class. A blank piece of paper lies before her. Vashti is sure that she “just can’t draw” and she does not even want to try. Her teacher suggests that she should “make a mark and see where it takes you.”

Dog Man is the crime-biting canine who is part dog, part man, and ALL HERO! This… Howl with laughter with Dog Man, the internationally bestselling series from Dav Pilkey, the creator of Captain Underpants!

Raina just wants to be a normal sixth grader. But one night after Girl Scouts she trips and falls, severely injuring her two front teeth, and what follows is a long and frustrating journey with on-again, off-again braces, surgery, embarrassing headgear, and even a retainer with fake teeth attached. And on top of all that, there’s still more to deal with: a major earthquake, boy confusion, and friends who turn out to be not so friendly. This coming-of-age true story is sure to resonate with anyone who has ever been in middle school, and especially those who have ever had a bit of their own dental drama.

Brian is on his way to Canada to visit his estranged father when the pilot of his small prop plane suffers a heart attack. Brian is forced to crash-land the plane in a lake–and finds himself stranded in the remote Canadian wilderness with only his clothing and the hatchet his mother gave him as a present before his departure. A story of survival and of transformation, this riveting book has sparked many a reader’s interest in venturing into the wild.

August Pullman was born with a facial difference that, up until now, has prevented him from going to a mainstream school. Starting 5th grade at Beecher Prep, he wants nothing more than to be treated as an ordinary kid—but his new classmates can’t get past Auggie’s extraordinary face. WONDER, now a #1 New York Times bestseller and included on the Texas Bluebonnet Award master list, begins from Auggie’s point of view, but soon switches to include his classmates, his sister, her boyfriend, and others. These perspectives converge in a portrait of one community’s struggle with empathy, compassion, and acceptance.

This sentimental but charming coming-of-age story about a spirited and unconventional orphan girl who finds a home with elderly siblings, became a classic of children’s literature and led to several sequels.