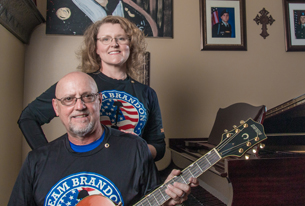 If you were to ask Tommy and Cathy Mullins how they spent the last weekend in May this year, they would tell you that they took a “Leap of Faith” with the Army Golden Knights by jumping out of an airplane in North Carolina. Tommy and Cathy haven’t always been thrill-seekers; this opportunity was made possible through a program that offers jumps to Gold Star family members. Gold Star families are those family members whose child or sibling was killed in action while serving their country in the Armed Forces. This particular event was meant to serve as a “healing experience, based on the idea that those families of fallen service members could live life fully and in a way that honors the life of their service member, despite their terrible loss.” Cathy says that, “After losing Brandon [we realized that] life is too short to live in fear.”

In August, it will be four years since Tommy and Cathy’s son Brandon was killed in action in Afghanistan. The two have found that being “the parents that lost a son” is a role that has come to define them for the last four years. Although they have experienced this devastating loss, they want to remind others that, there is no time table on grief, and, it is important to them to “let people know who we really are…not just the parents of a soldier who has been killed.” The reality of who they really are has been revealed through the many ways this resilient couple continues to serve the community.

Both Tommy and Cathy have learned to draw from their gifts and passions in order to serve others in our community and work toward healing, themselves. Tommy says that, sometimes, “we need to be able to bond with other people, but it’s difficult because we’ve lost a child. We are able to bond with others through music.” Music is a common thread that the two have always shared. In fact, their love of music helped to bring them together over twenty-eight years and three children ago.

Cathy has been sharing music with young children in the Owensboro area through Kindermusik for the last ten years. Although she thought it may be difficult to be around small children after losing one of her own, Cathy says, “How can you be sad when looking at a child shaking a shaker?” On August 8th, some of those precious children will be joining the Owensboro Symphony Orchestra for the “Concert on the Lawn” in order to perform a special arrangement of “Twinkle, Twinkle, Little Star,” something Cathy is very proudly looking forward to.

Through his experiences, Tommy has discovered “new creativity to write” music. Tommy has also teamed up with fellow musician Randy Lanham to create Inspiration Junkie, an online radio station that provides twenty-four hours of uplifting music. The tandem broadcasts a radio show in Owensboro each Sunday at 1 p.m. on 94.7 WBIO. Tommy and Cathy also use their passion for music as part of the dynamic worship team at BridgePointe Church, they sing and speak at Hermitage Rehabilitation Home Care, play in the Hospice House music program, and take part in the Night of Worship downtown.

In addition to their love of God and music, the Mullins have always been a patriotic family. Yet patriotism has now taken on a whole new meaning for this family, who now find themselves being invited to speak and perform at a litany of local patriotic events. As Tommy says, “We prayed for a bigger platform [to reach others], but we never dreamed of anything like this.” The weekend after the two jumped out of an airplane in North Carolina, they made their way to Washington, D.C. to accompany WWII and Vietnam veterans on the Bluegrass Honor Flight. They are also active in the VFW Auxiliary, Kiwanis Rotary, and raised over $10,000 last year for various community organizations, including Honor Flight and Honor and Remember, through their first Veteran’s Day 5K race. This year they also plan to support Jeff Hastings and Warrior 180, a Christ-centered organization helping soldiers and their families with post traumatic stress disorder. Tommy says that he and Cathy feel that it is important to, “honor those who gave their lives like Brandon and those who came out on the other side with PTSD.”

With Tommy being an Army veteran, and having two sons and a son-in-law in the Army, military holidays are appreciated and celebrated strongly in this home. Cathy was recently invited to Brandon’s elementary school in Ashland, Kentucky to educate the students about the meaning and significance of Memorial Day. She was also able to speak with them about Brandon’s battle and walk through the events that occurred; an event that Cathy says was “very cathartic for me.”Although Cathy was invited to assist with the fireworks downtown last Fourth of July, and plans to attend the city fireworks again this year, military holidays have become a bit of a “double-edged sword,” where Cathy says she finds herself, “sad and happy all at the same time.” The couple has come to find that now, each new holiday brings with it a time of celebration, as well as a time of reflection and healing.

By “loving God, and loving people and turning sorrow into service,” Tommy and Cathy have not only learned how to draw closer to God and each other, but how to touch and transform our community as well. The couple says, “Brandon would want us to live our lives with passion, [and] soldier on. [We] choose joy.”

Melody Ann Wallace is a teacher at DCMS who finds new blessings each day in her roles as teacher, wife, mom, and step-mom.