When Stephanie McDuffee Hodskins was expecting her third child, Zach, there was no indication that anything about Zach’s development was abnormal. When their son arrived, the doctor told his parents that there was a problem. Stephanie’s first concern was whether or not Zach was breathing or had major health defects. When she was informed that he had a limb deficiency and was missing his left hand, although she was a bit shocked, she seemed to handle the news fairly well. If you have seen any footage of Zach playing basketball, you will notice that it doesn’t seem to faze him either. So, how does a parent raise a child to believe that they can play sports at an elite level when they only have one hand to play with?

Zach’s parents, Bob and Stephanie, were both born and raised in Owensboro. Stephanie is a graduate of Apollo High School, while Bob graduated from Daviess County High School, and went on to play baseball for Kentucky Wesleyan College. The two met while Stephanie was a senior at Apollo and Bob was a senior at Wesleyan. They later married and soon found themselves in pursuit of employment opportunities in Lexington, where they would stay for fifteen years and start a family. All three of their children were born in Lexington: Lauren, now twenty-seven, their daughter Logan, now twenty-one, and Zach, currently nineteen. After giving birth to, and raising two healthy girls, Stephanie says, initially, the thought of Zach “not having a hand was a shock, but I knew everything was going to be okay.”

When Zach was just four years old, Bob and Stephanie were referred to Shriners Hospital, where Zach was fitted with a working prosthesis. Stephanie says that, “it lasted about a week, and then he realized he could do so much more without it.” The family learned to adapt to different situations and make accommodations as necessary. As a mother, naturally, Stephanie says that there were times she felt bad for Zach, “but I wouldn’t tell him that.” Her feelings were never those of pity, but of an unconditional love and desire for her son to believe in himself and what he could achieve. “I could probably count on one hand how many times he has felt sorry for himself.” It was very important to Bob and Stephanie that they raise Zach to realize and appreciate the skills he had, rather than focus on what he didn’t have. His mother says, “I don’t ever look at him and think, ‘He doesn’t have a hand.’ We just never have.”

Up until the time Zach was about six years old, he had never gone to school with anyone else like him. One day, Stephanie found a glimmer of hope for Zach’s future while sitting in a church pew. She recalls, “The lady sitting behind me tapped me on my shoulder and handed me a picture of her son in a football uniform.” He looked just like Zach. “That’s when I thought, oh, my gosh. Zach’s going to be okay.” From that point forward Stephanie says, “I can’t think of anything he couldn’t do—he just did it differently.” While Shriners Hospital does offer a “one hand tie method” for tying shoes, Stephanie grew frustrated, as she was unable to teach Zach how to do it. After worrying that Zach may have to wear slip on shoes for the rest of his life, Stephanie says that Zach watched the little boy that wore the football uniform tie his shoes over and over again until he was able to teach himself how to do it. She now recalls that, even when he was in high school, people would stop Zach in the hallways to show them how he tied his shoes.

As a child, Zach played baseball, soccer, basketball, and eventually learned to surf. His dad, Bob, used his baseball knowledge and experience to work with Zach on and off the field. They even took Zach to Cincinnati to watch one-handed Yankees pitcher, Jim Abbott play. Zach saw how he pitched, and learned how to hold his glove and throw in a similar manner, as well as hit both ways. While Zach appeared to have natural athletic ability in many different areas, it was basketball that became his true love. His mom recalls, “He was so dedicated that he would practice like crazy because he had to work twice as hard at it.”

When Zach was in high school, Bob and Stephanie relocated their family to Atlanta, Georgia so that they could nurture his love and passion for the game. It was important to Zach’s parents that he have an opportunity to improve his level of competition and play. He made his high school team, and played AAU (Amateur Athletic Union) travel ball as well. One particular day during AAU camp, one of the few days that Bob and Stephanie were not present, several college coaches were in attendance. Someone mentioned to Zach that the University of Florida may have an interest in him. His parents quickly contacted his high school coach, who verified the fact that Florida indeed was interested. It was not long before the family received a call from the assistant coach at Florida, former Kentucky Wildcats player and Kentucky Mr. Basketball honoree, John Pelphrey. Pelphrey invited Zach to come to Florida for a visit. Stephanie says that, although “he had some offers from some smaller schools…after visiting Florida, he fell in love with it and there were no other options to him.”

Zach welcomed the challenge to be a Florida Gator and made the team as a preferred walk-on. Stephanie recalls what a big deal this was, “His whole life he has had to prove himself because the first time any coach looks at him, they think, ‘He can’t do that!’ He is determined to show them, “Hey! Look! I can do it like everybody else.” And he has shown them, while lifting in the weight room, by insisting on pulling a car on his own during conditioning, and by showing up on the court. On December 22, Zach made his first career basket for Florida while playing against Jacksonville. The video was viewed and shared thousands of times across social media as ESPN’s Scott Van Pelt proudly announced Zach as “The Best thing I Saw Today.”

As for his future beyond college basketball, Zach has been inspired by Nubability, an organization in Illinois that offers children without limbs the opportunity to play sports with coaches who also have limb deficiencies. Last year, Zach had the chance to coach basketball, and he came away with a new appreciation and pursuit in life. His other inspiration is that of Division One Manhattan College basketball player, Kevin Laue. Zach found Kevin on YouTube a few years ago and noticed that Kevin’s limb deficiency was exactly the same as his. He told his mother, “He’s just like me, Mom.” Zach contacted Kevin, and eventually they met and became good friends. Kevin has become a mentor to Zach as a basketball player and as a human being. Last year, the two traveled to China to visit and speak at area churches, prisons, and schools. They provided a message of hope, as well as teaching some of the children how to tie their shoes. Zach has since switched his major to public relations and hopes to eventually pursue a career in motivational public speaking, where he can travel and continue to make a difference in the lives of others. Confident in his abilities to do so, Stephanie says, “I don’t think he realized he was having such an impact on people.”

Bob and Stephanie have raised all three of their children to be strong, independent individuals whom others could say they were proud to know. They have learned a lot over the last nineteen years, like how to react when others stare, and what to say when people ask what happened to Zach’s hand. Zach sometimes has fun with this one, although his usual response is, “God made me this way.” Stephanie’s advice to other parents is not to be so hard on yourself or feel guilty when things don’t go as expected. She says that so many parents are afraid to let their differently-abled children try things “because they are afraid that they are going to fail and they don’t want to see them get hurt.” The best thing that you can do for your child is to “let them get involved in things, and don’t hold them back.” Most importantly, regardless of what the day brings, remember that, “It’s not always okay, but it’s going to be okay.”

Melody Ann Wallace is a 6th grade language arts teacher at Daviess County Middle School who finds new blessings each day in her roles as teacher, wife, mom, and stepmom. 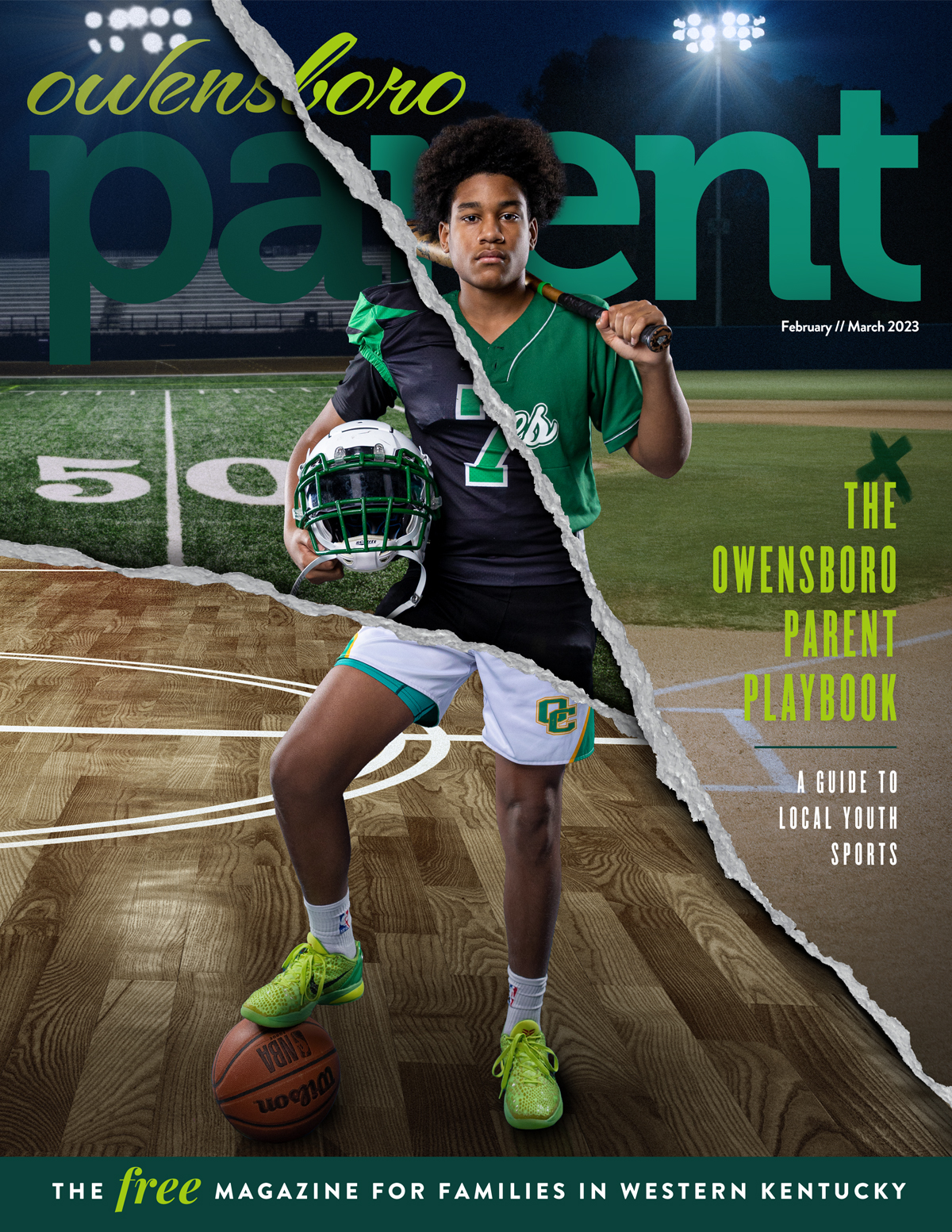