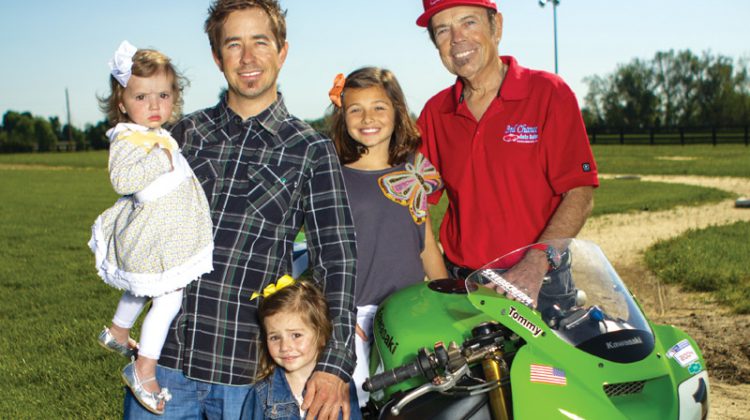 Owensboro has produced its fair share of professional athletes over the years, including NFL, NBA, MLB, and NASCAR stars. But three of the brightest stars in motorcycle racing also come from Owensboro: Tommy, Nicky, and Roger Lee Hayden. If you’ve ever walked through the SpeedZeum at the museum or watched the MTV movie “The Kentucky Kid” you know exactly what I mean.

So I have to admit that I was a little star struck when I introduced myself to Earl Hayden, the patriarch of the Hayden racing family, and his son Tommy for this interview. But I came away with one word in my mind: humility.

“You ought to be talking to my wife, Rose,” Earl told me right off. “She’s the real story. She gave up a lot of stuff so that our boys could go off racing their motorcycles.” It didn’t take me long to realize comments like that are in typical Earl Hayden fashion. It’s in his nature to downplay himself, shy away from the spotlight, and give credit to someone else. In fact, Earl was hesitant to even do this interview because he didn’t want to be put on a pedestal. “I don’t want this article to sound like I’m bragging or like we’re something special. Every parent thinks their kids are the greatest, so I’m no different than anybody else,” he said.

Right. Except for the fact that Earl’s kids are three of the most famous and successful motorcycle racers in the world. We sat in Earl and Rose’s garage, which has become a store room full of Roger, Nicky, and Tommy’s racing memorabilia. Pictures, trophies, and plaques line the walls above a row of motorcycles ranging from the mini-bike they all learned to ride on, to Tommy’s 2004 AMA championship ride and Nicky’s 2006 world championship MotoGP bike. Just a few feet away, where we took the photo for this month’s cover of Owensboro Parent, the home-made dirt track wound around the back lot; the site of countless laps all five Hayden kids honing their craft as kids; Earl’s stopwatch in hand.

The Haydens might be world famous, but they are Owensboro through and through. All five of the Hayden kids graduated from Owensboro Catholic High School and attended Precious Blood Catholic Church growing up. Four out of the five still live in Owensboro (with the exception of Jenny, who lives in Utah because her husband is a doctor and got a job at a hospital in Ogden.) In fact, it’s not unusual to find them at a Friday night football game cheering on the Aces. Daughter Kathleen keeps things running smoothly at the family business, 3rd Chance Auto.

It’s that kind of hometown pride that Owensboro Parent wanted to capture in this Father’s Day special feature by sitting down with Earl and Tommy Hayden to talk about raising kids in Owensboro, family values, and racing.

O.P. – Earl, how do you stay in touch with your kids and grandkids when they’re literally scattered all over the world sometimes?
E.H. – Well with these new phones these days it’s really nice because we can do Face Time with Jenny and our granddaughter Kyla Jo out in Utah. So we get to see them all the time even though we’re not actually with them. But like with Nicky, if he’s racing in another country we use a program called Viber, which is like Skype, that works no matter where he’s at. It’s gotten harder to get everybody together. Really the only time is like at weddings. With their racing schedules, the boys might be in three different countries on the same race day. Another thing we try to do is rotate who travels with the boys. Rose and our daughters try to go to a different country each year. So that’s nice because the boys have family with them and Rose and the girls get to see the world. About the only time they all three race at the same track on the same day is Laguna, California, so that race is almost like a holiday for us because we can all be there.

O.P. – Tommy, obviously you travel a lot with your job. How do you balance being gone so much and still spending time with your kids?
Tommy – Yeah, things change when you have kids. Immediately. It’s definitely not easy to leave and be gone. I used to get to the track a day or two ahead to practice or whatever. But now I get there at the last possible second and I leave as soon as I can.
I build my schedule differently now. I used to train in California all winter because the weather’s so much nicer. But now I do my winter training here. And my wife and kids go with me a lot. Probably four or five races a year. When they come along I always drive so we can make stops along the way and find things to do on the way there and on the way back to make it more like a mini-vacation. Zoos or parks or whatever. I’d say it’s a trade-off. It stinks that I’m gone a lot during the season, but then they get to have some experiences they may not have if I wasn’t racing.

O.P. – Earl, what’s the best part about raising kids in Owensboro?
E.H. – The family atmosphere. The way people are here. Owensboro has it all. And it’s a slower pace than bigger cities. It really is a great place to raise a family. I think our kids all recognize that and that’s why they’ve mostly stayed. All our kids still call Owensboro their hometown, even Jenny, and I think they would come back in a heartbeat if her husband could find a job at the new hospital or someplace.

O.P. – Tommy, what did you like about growing up in Owensboro?
T.H. –You know, you don’t really think about it much until you get older or travel a little bit and see other places. But now looking back, Owensboro is just a good atmosphere. And good people. I really liked our property, and being able to ride anytime we wanted to.

O.P. – You all could live anywhere, yet you still live in Owensboro. What keeps you here?
T.H. – Owensboro really is a great place to raise kids. For me it’s never been an option. It’s always felt like home here and it’s always been my home.
E.H. – I know one thing the boys love about Owensboro is that it’s just comfortable for them here. They can come home and just be themselves here. See their old friends or whatever.
T.H. – Yeah, I’ve always had a close-knit group friends here in Owensboro. I’ve been a lot of places racing, and we have a second house in California, but I’ve always considered Owensboro home and I always will. No matter where I’m at, I’m always excited to get to come back home here.

OP – Earl, how do grandkids compare with kids?
E.H. – Oh, I can’t get enough of these grandkids! We just love to see them. Rose and I, we love to babysit. They’ll thank us for watching the grandkids but we think we should thank them! You know, when you’re raising kids, you’re so busy. You work all the time. But now, with these grandkids, we have more time so we don’t miss a practice or a game hardly.

O.P. – Tommy, what surprises you most about being a dad?
T.H. – Definitely seeing all the stuff my parents did or talked about when we were growing up. Now I appreciate it more as a dad. Like the things they sacrificed for us so we could race. Now I see it in the simple things. I might go across town to watch my daughter play a softball game, but they went across the country with all of us. Lots of times.

O.P – Earl, what values do you and Rose hope to pass on to this third generation?
E.H. – If I’m gonna pass on anything I hope it’s respect. I’ve always said “Keep your word good and pay your bills.” I think that goes a long way. And faith. You gotta have faith in God. And that’s another thing about Owensboro is there’s so many churches here. You can find what you like and go there. We’ve always tried to stress that importance.
T.H. – I guess for me it would just be the good standard values like we learned. I really hope my daughters can find something they like early on like I did and pursue it. I hope they can find a job that they’re as passionate about too.

O.P – Okay, so I gotta ask… have the girls shown any interest in racing?
T.H. – Oh no! None whatsoever. And that’s fine with me. Olivia likes to ride 4-wheelers but that’s about it. Klaudia Rose hasn’t yet. Of all of them, maybe Vera because she likes to pretend she’s riding things, but I think it’s more about ponies than motorcycles. She’s only 1 ½ so we’ll see.

From just being around the Hayden family a short while for this interview, it’s obvious that their roots in Owensboro run deep and their family ties are strong. Which leads me to believe that the Hayden’s greatest successes and blessing in life are actually off the track.