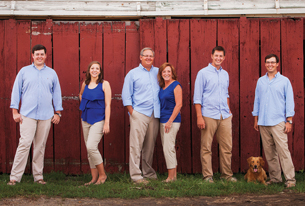 When Christy Gilles married Jimmy Gilles, she knew what the life of being married to a farmer would be. Growing up on a farm, she worked in tobacco and knew the meaning of hard work. Jimmy also grew up on a farm and saw the agri-business side of agriculture with his dad owning a farm implement dealership. Knowing that farming would be their lifetime occupation, Jimmy and Christy Gilles have raised four children on their family farm located just outside of Owensboro.

Hill View Farms has been the home for all the Gilles children: Jim, Brandon, Zach and Amanda. Amanda, the youngest of the four children graduated in June from Apollo High School where she served as President of the Apollo FFA Chapter during her senior year. The FFA is a national organization whose mission is to make a positive difference in the lives of students by developing their potential for premier leadership, personal growth and career success through agricultural education. Amanda shares this distinction of FFA President with all three of her older brothers who all have held the office of FFA President at Apollo, a distinguished achievement for one family. Jim, the oldest of the Gilles siblings, is a graduate of the University of Kentucky and owns and operates Hill View Meats, a custom meat sales business on the family farm. Brandon, also a graduate of UK, is a Financial Services Officer for Farm Credit in Owensboro. Zach, the third son, will graduate from the University of Kentucky next year with a degree in Strategic Marketing Communications. He is currently completing an internship with the Kentucky Cattlemen Association.

Each of the Gilles children agree that growing up on the family farm instilled leadership qualities that came naturally. Brandon Gilles says, “There were times when our friends made plans to do things at night and on weekends that didn’t always fit into our plans due to farm work. As we got older, we understood there was work that just had to be done.” He remembers a time when he and his dad topped two acres of tobacco in an hour and a half while hearing the thunder of an approaching storm. After the storm, they found the entire tobacco patch flattened by high winds. The results were disappointing, but a lesson on the unpredictability of farming was learned. Jim Gilles expressed, “Some of my friends didn’t understand that farming is not a nine to five job. But on the other hand, I had lots of friends who envied us living on a farm. Growing up on a farm taught us responsibility and independence.” Amanda remembers her Dad working with her on the farm practicing for the FFA tractor driving contest at school. “I was unsure about driving the tractor in a contest, but Dad worked with me and helped me build my confidence. Although some of my friends growing up thought I lived way out of town, most of them, especially the girls, thought the farm was a truly neat place to visit.” Zach’s best farm memory was learning to drive a tractor when he was seven years old. “I thought I was the cool kid in town learning to drive before anyone else and getting to operate such a large piece of equipment.”

Each of the Gilles children were given opportunities to participate in clubs, organizations and sports. Jimmy Gilles said, “We never pushed our kids to participate in any activities. The only rule we had was that once they started an activity, they couldn’t quit till it was finished.” Every school year, each Gilles sibling participated in many extracurricular activities. When reaching high school, it seemed they all leaned toward agriculture classes and the FFA organization. From speaking contests to tractor driving competitions, they all felt their ease of speaking before a group of people become more comfortable. Public speaking became their foundation as they each undertook leadership roles in the FFA which lead to each one becoming their chapter President. Brandon believes FFA became their sport whose season became year round. Each child in the family has encouraged the other and offered advice when needed. “All of our children have gained the ability to speak on the spot through their leadership roles,” added Christy Gilles.

Jimmy Gilles, who has held leadership positions with the Daviess County Cattlemen Association and Daviess County Farm Bureau, knows the importance of leadership in the field of agriculture. Jimmy says his father used to say, “You have to be involved in the community. Don’t complain if you’re not participating.” Jimmy and Christy Gilles gave each of their children the freedom to participate in whatever they wanted. They not only let their children participate, but they both became active parents in all their activities. From elementary school to college, it was not unusual to see the Gilles parents at most all of their children’s activities. “Even in college, it wasn’t uncommon for our parents to drive three hours to see us in a college activity for two hours and then drive home,” said Brandon Gilles. Seeing and knowing where their children were gave the Gilles parents a comfortable peace of mind. We knew their friends and their parents and that instilled trust in our children. We welcomed many kids into our home and farm as our kids grew up,” agreed Jimmy and Christy Gilles.

Jim and Brandon Gilles are already college graduates and have begun careers back home. Both are very active in local civic and professional organizations. Getting involved and stepping out of their comfort zones are already giving them growth in their careers. Zach doesn’t know where his degree at UK will lead him, but knows that all of his farm experiences will guide him in the right direction. Amanda plans to become active in college just like her brothers. Unsure of what area she will major in at UK this fall, she knows that creating a network of friends like in high school, will make her college experience complete.

The family farm has provided a workplace for all the family to work hard together, but also play hard as well. What advice do the Gilles children have for their peers that follow them? Work hard, get involved, be an individual and always be yourself. Each hope that they can provide the same experiences for their own families in the future that their parents provided for them. And that makes both Jimmy and Christy Gilles very happy!

James Morgan is a retired agriculture teacher from Apollo High School and is currently employed by the Scotts Miracle-Gro Company. He and his wife, Gayle, are the parents to two sons and are known as “Papa and Gigi” to their granddaughter and grandson.