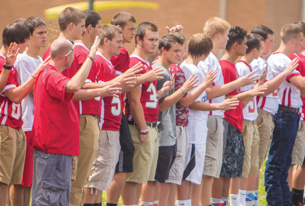 On Thursday, August 7, an unbelievable tragedy struck when 17-year-old Apollo High School student Taylor Widmer was killed in a car accident, leaving many Owensboro teens stunned, shocked, and grieving the loss of their friend. Taylor was one of those people that everybody knew. He had friends in several schools, played football, wrestled, and was a Young Life mentor. Any time a young person dies there is usually an outpouring of love and support for the family – especially in this town.

That’s what led two Daviess County High School “cross town rival” football players to do something special; it was their idea that the entire DCHS football team should honor their fellow football player by wearing their jerseys and standing along Highway 54 as the funeral procession passed by.

When DCHS football coach Marcus Kimbrell heard the idea, he couldn’t have been more proud. “On Friday nights it might be about football,” Kimbrell said, “But none of that matters. What really matters is showing love to other people. This is the least we could do.”

Details were sent in an email to parents and the DCHS football Twitter. “I could tell by the number of retweets that this was something that was really catching on,” Kimbrell noted. “Obviously, Taylor was a pretty special kid and he touched a lot of people. He had friends on our team and friends in our school. I just think this is a great opportunity for our kids to show their support to Taylor’s family and the Apollo High family as well.”

Word quickly spread and the invitation was opened up to any DCHS student who wanted to join the team in showing their respect. But why stop there?

Kimbrell next called Coach Prince at OHS and Coach Edge at OCHS, who were more than happy to be included and quickly passed on the opportunity to their players as well. By then the plan was for anyone who would like to show their respect to wear their school colors, meet at Kohl’s parking lot, and then spread out along both sides of 54.

It was a rainy, gloomy day on 54 as the crowd gathered, but shortly after noon the clouds began to break. As the funeral procession drove by, the sun shone through, illuminating a solid wall of blue, red, and green. It was a moment that was started by two, shared with hundreds, and then witnessed by thousands through a video clip posted on OwensboroLiving.com.

“The outpouring of support that the community gave Taylor’s family was a beautiful thing to see,” said Mike Flaherty, Student Assistance Coordinator for Daviess County Schools. “I really think it helped the healing for his family and friends.”

Flaherty is also the director of the Crisis Response Team, a group of school counselors who provide support to schools when they suffer a traumatic loss of a student or faculty member. Flaherty said, “With Taylor’s case, the crisis team was available, but the coaches, teachers, and really the entire community pulled together so well that everybody just sort of took care of each other.”

That’s what we do in times of loss. When there are no words, we stand together. Sometimes just being there says what words can’t. One comment on Facebook about the procession down 54 said it best: “…that’s how we do it in Owensboro.”

Danny May is a husband and father of two boys (4 and 5). He is the Director of Family Life at Lourdes Catholic Church and a regular contributor to Owensboro Parent Magazine.