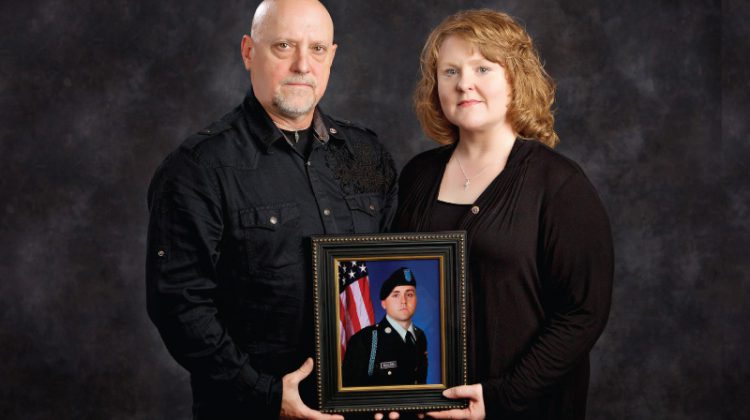 Although the Mullins family moved to Owensboro more than 10 years ago, the memory of their son, dressed in camouflage, playing on an armory tank in their hometown of Ashland, Kentucky is not so distant.

Tommy Mullins, 51, wife Cathy, 42, and their three children have always been a proud, three-generation military family. And when that son, Brandon, who quickly traded in his childhood camo for military fatigues, decided to enlist in the United States Army in Feb. 2010, both parents fully supported him.

“He relished the idea of protecting the United States,” Tommy said.

For Brandon, joining the Army was not a difficult decision. His older brother, Shaun, now 23, had enlisted before him and Brandon also chose to join the infantry.

“He wanted the tough job,” Cathy said. “He wanted to fight. He was competitive.”

Brandon reported to basic training and was later sent to Alaska for further preparation. In May 2011, he was deployed to Afghanistan.

“Brandon matured very quickly,” Tommy said. “From the time he entered basic training…you could see a big change in his life. He was headed in the right direction with his life.”

Able to speak with their son every week, Tommy and Cathy knew he was proud of his service to his country. On many occasions Brandon told his parents he wished to reenlist.

“Brandon knew what war was about,” Tommy said. “He was a part of the 9/11 generation. He wanted to fight the war on terror.”

And fight is exactly what Brandon did, until August 25 when his vehicle drove over an improvised explosive device. He was 21 years old when he died.

That same day a chaplain and notification officer from the Army station at Ft. Campbell, Kentucky were sent to the Mullins’ home. But they were not there.

Tommy and Cathy were actually back in Ashland that day, preparing funeral services for Cathy’s mother who had recently died. Their daughter, Bethany, 19, was the only family member home when the two officials rang the doorbell.

Because Brandon’s parents were required to be notified first, Army protocol did not permit the officials to inform Bethany of her brother’s death. In fact, until a chaplain and notifying officer out of Ft. Knox, Kentucky could reach the Mullins in Ashland nine hours later, the family was uncertain of what happened to their son and brother.

“We had already processed a lot in our hearts,” Cathy said. “Our faith had already settled in.”

It is their faith in God that the Mullins attribute to their ability to cope with their son’s death.

Cathy remembers meeting a USO Officer at the Dover, Deleware airport, where their son’s body was returned home.

“[That officer] made the comment, ‘I am amazed at your family. You have come together through this. You would not believe how divided people are. How angry people are,’” Cathy said. “Families go through this all the time.”

The Mullins understand their son’s death is not the only loss.

“Every day there is another soldier who dies,” Cathy said. “There might be one or two soldiers tonight, might be two or three the next day. Since Brandon died there have been at least 20.”

In fact, since the war began in the Middle East, more than 6,000 American soldiers have lost their lives. While Brandon’s death has added to this statistic, Tommy and Cathy are happy to have their son home.

“People don’t understand that there are people unaccounted for from past wars,” Tommy said.

Since World War II, 22,000 soldiers are missing in action.

“It’s comforting to know Brandon is home,” Cathy said. “We know where Brandon’s at. He’s OK.”

The Mullins family never dreamed they would receive the amount of support from their community as they did when they brought their fallen soldier home.

“He had a hero’s memorial,” Cathy said.

Sept. 11, the day the entire country remembered the terrorist attacks from 10 years ago, the Mullins family held a memorial service for their son. An astounding 800 people attended the service. The funeral procession, lead by 576 motorcycles, traveled from Good Shepherd Church to Owensboro Memorial Gardens, taking one hour to drive 11 miles.

Tommy and Cathy, married almost 25 years, attribute their ability to cope to the strong support they have received from their family and community and their faith.

“We don’t expect to bury our sons and daughters,” Tommy said. “We expect them to bury us.”

Steady prayer has consoled this broken family. And despite their deep loss, the Mullins are encouraged at the thought of helping other families survive similar tragedy.

But most importantly, as parents of three children and survivors of one child’s death, the Mullins want to emphasize one thing.

Special thanks to Tommy and Cathy Mullins for sharing their story with Owensboro Parent.

By Ashley Sorce. Ashley is a first-time mommy, a not-so-newlywed, an organizational freak and the editor of this awesome magazine. (Which is of course a totally unbiased opinion.)