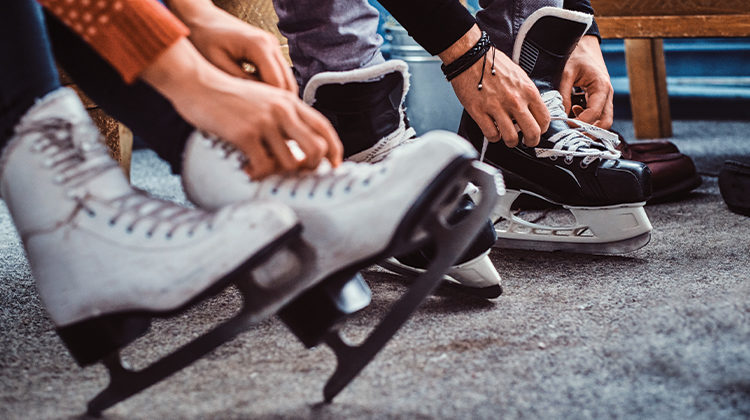 Thanks to a unique partnership, a little holiday spirit will glide into downtown Owensboro this winter season. Energy on Ice, an outdoor skating rink, will be set up along the Owensboro Riverfront this winter, which will allow families to get outside and enjoy the holiday season while remaining healthy and socially distanced at the same time.

Energy on Ice will be set up in McConnell Plaza, which is located just east of the Owensboro Convention Center, and is scheduled to open Nov. 27 and run through the first of the year.

City of Owensboro Assistant City Manager Lelan Hancock explains that the rink will not actually be made of ice, but instead synthetic ice, which is used by the National Hockey League. This product offers more durability, a longer lifespan and the option of year-round usage. The rink size will be 80 foot by 60 foot and will be based on the concrete pad at the center of McConnell Plaza.

“Some additional bonuses to this system is the fact that we will not be dependent on weather or temperature causing a closure of the rink, with added features making the system easy to clean and maintain,” Hancock said.

Hancock said the City has received many requests over the years to bring back ice skating to downtown during the winter months. Winter Wonderland, an event featuring an ice skating rink made of real ice, was previously hosted at the RiverPark Center plaza from 2004 to 2011, but ultimately ended because of the high cost.

“This system will provide a better experience than the previous rink for the fact that sunlight will not cause any melting issues, which will provide consistency in skating conditions,” Hancock said. “This system skates and responds much like real ice, without all of the expense of the ice making equipment or the problems that real outdoor ice rinks experience due to wet weather or excessive heat from sunlight.”

Several different groups came together to make this event happen for Owensboro families. David Johnson and Fred Reeves of A+ Leadership were tapped by the City of Owensboro to study the livability of downtown Owensboro. As a part of that study, they looked at Mayor Tom Watson’s OBKY Project, which focuses on economic and social growth for Owensboro and included the return of an ice rink to downtown. With Johnson and Reeves spearheading the project, the City is handling infrastructure services, Visit Owensboro is created the marketing for the event, the Owensboro Convention Center will oversee the operations of the seasonal skating venue and the Greater Owensboro Chamber of Commerce helped secure the sponsors for the event.

Southern Star Central Gas Pipeline, Atmos Energy, Boardwalk Pipelines, and the Staton Family Foundation are all sponsoring the outdoor rink through 2027, meaning no taxpayer dollars were used for the event.

“When we say this is a community event, we don’t just mean once it opens,” said Laura Alexander with the Owensboro Convention Center. “It was a community partnership from the very beginning.”

According to Alexander, this experience is more about creating an event for the community than making money.

“We are working on providing more activities other than a skating rink and our team are vetting those ideas right now to see what works,” Alexander said. “We will be definitely offering concessions and planning certain activities on various nights.”

Visit Owensboro’s Dave Kirk said the purchase of the synthetic ice rink is a great amenity for Owensboro.

“Imagine renting the Convention Center for a conference and, oh, by the way, you can also rent this ice skating rink for your attendees for an icebreaker?” Kirk said. “Or think about having a sports tournament and as part of your entry fee, you get to skate when you’re not playing ball.  The possibilities are endless.”

Kirk said the rink itself will attract people to visit Owensboro for a weekend stay making it a great leisure tourism attraction for Owensboro. But more than that, it’s great for Owensboro families who want to celebrate the season.

“People want to get out and have memorable experiences while at the same time feeling like they’re comfortable in their element,” Kirk said. “Energy On Ice is the perfect way to breathe new life into something in Winter Wonderland that people loved.”

The Owensboro Convention Center will be providing food and beverage during the operation hours, with a seating and viewing area for those who choose to watch their friends and family skate.