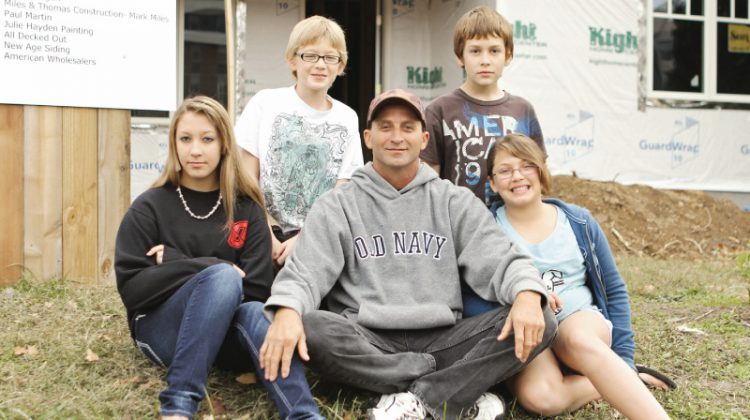 For Lannie Chambers, setting an example for his kids is the only way he knows how to live.

“I teach my kids morals and ethics,” he said. “If you want something, you have to work for it.”

And that’s just what he’s been doing.

Chambers is going to be the new owner of the 100th house built by Owensboro’s Habitat for Humanity (HFH), a project lead by Mike Ballard of Ballard Construction.

A single father of two girls and two boys, Chambers has been working full time and logging 20 sweat equity hours a month as part of the Habitat for Humanity application process.

“I didn’t have a clue how I was going to do it,” Chambers said. “I thought it would be impossible.”

But Chamber has almost completed his required hours and his house is slated for completion in mid-November.

The Owensboro chapter of Habitat for Humanity was founded in 1988. Houses are sold at no profit and no interest to families that pass the application process. The materials and labor hours for each home are funded through donations, volunteers, grants and a 20-year, zero-interest mortgage that the homeowner pays.

For Chambers, a new house means greater possibilities and a new future for his children. Living month to month, paying rent, Chambers attempted to purchase a home on his own. But with no credit card or loan since he was 24, he had poor credit.

“I went through credit counseling and got a lot of stuff cleared up on the credit report,” he said.

A credit coach instructed him on what to buy and how to handle his credit so that he could improve his rating.

“I’m limited on my income with being a father of four and that’s what made me go through Habitat for Humanity.”

The future looks a little brighter for Chambers as a new home will help bring financial security.

“I will be able to do a lot more things I couldn’t as a renter,” Chambers said. “I can have a dog, pool, maybe one day a garage. Be able to get my kids more than they have now. Maybe help them through college. We can go out to eat more. Be able to go out and do more things more. You only live once.”

Virginia Braswell, director of HFH said, “Families call about applying and we ask them some basic questions: Have you lived in Daviess County at least 12 months? You can be married, single or divorced just not separated because of legal homeownership issues. Do you own land or a house? If so, you are not eligible for our program. No large outstanding debt (over $5,000). No bankruptcy in the past two years, and we will do a police check.”

Recipients of Habitat for Humanity homes vary greatly in their circumstances. But the one thing they all have in common is they have to work to receive their home.

“You’re not going to get things handed to you,” Chambers said.

“Sweat equity is like a down payment,” he said.

HFH applicants log hours, helping build houses and other tasks for the organization.

“We partner with families to get their home and they partner by working 350 ‘sweat equity’ hours before moving into their new home,” Braswell said. “We work with handicapped persons so they can get the required hours by collecting aluminum cans for our can drives, working various fundraisers, newsletter mailings, and homeownership workshops.”

Chambers said the toughest part is trying to work and pay your bills, and then work for them too.

“They definitely mean sweat equity,” Chambers said. “You don’t just fill out an application and get a house.”

He said you have to come up with lawyer’s fees, appraisal fees, inspector fees, first month’s payments, and homeowners insurance.

Even though getting his “sweat equity” and money to move hasn’t been easy, Chambers said, “Every bit of it has been worth it.”

For Chambers, there are definitely more pros than cons to working for a HFH house.

Chambers did say that there are limits to the house. For example, he has four kids, but can’t get a four-bedroom house.

“You can’t have everything you want, but it’s a brand new home,” he said.

For Chambers, the work was hard, but fulfilling.

“I don’t mind to work and help,” he said. “You get a good feeling helping other people.”

Chambers is also teaching his children by example, as his father taught him.

“My kids have to work for what they want,” he said. “I’ve earned every bit of what I got. My dad was a millwright. He knew how to do everything. He could make cedar chests and trailers, work on lawn mowers, etc. When I was growing up, we would tear down and build houses and had a great time.”

There is no lack of work at HFH for people looking for it, Chambers said. And he’s teaching his children to meet that type of hard work head on.

“I’ll encourage them in anything they want to do,” he said.

While Chambers was surprised that he and his family would be the recipients of a brand new home, he is nonetheless grateful.

“To sum it all up, on behalf of me and my family,” Chambers said, “words can’t describe how much it means to me. If it wasn’t for God, I wouldn’t have been this far along.

I appreciate everything I can get. Doesn’t matter what it is.”

By Jessica Weafer. Jessica Weafer is a stay-at-home mom and freelance writer. She lives in Owensboro with her 1-year-old son, husband and cat.