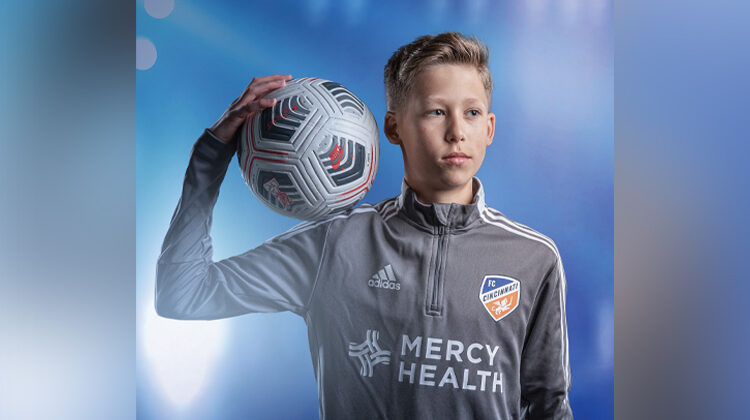 Local youth Merrick Joska is on an entirely different level regarding youth soccer. The 12-year-old Owensboro native is presently participating in the Major League Soccer (MLS) NEXT Program, where he dedicates an entire year to the U13 FC Cincinnatti (FCC) Academy.

The NEXT program website says it offers a new paradigm for player development and presents a platform that will transform the way players learn and grow. Joska was part of a rigorous and intensive 12-week tryout program held in early 2021, where he traveled to train with other talented players from many high-level clubs across the midwest.

“It is a year-long commitment, where I train four to five times a week at the Mercy Health Training Facility in Milford, OH,” Joska said. “Along with this training, we have a fall and spring season where we travel all over the midwest and play other elite clubs and MLS next teams in cities like Chicago, Detroit, Columbus, Pittsburgh, and across other states.”

While Joska spends his winters at Owensboro Middle School, the sixth-grader relocates to Fort Thomas Highlands Middle School in the Cincinnati area to be a part of the program. While camaraderie, competitiveness, and travel play a pivotal role in his enjoyment of the sport, he gets a lot of pleasure from running.

“The first thing I enjoy about soccer, believe it or not, is the running. I love to run track and cross country as well as running during soccer matches,” he said. “I like the competitive nature and technical part of the sport too. Getting to travel to many new places to play is also a nice perk, and of course, hanging out with my teammates – old and new – because they are some of my best friends.”

Joska began his playing career with the Daviess County Recreation League at age four and joined SportsTutor Futsal Academy with Ty Stauffer at age six. SportsTutor is an Owensboro-based program and facility designed for athletes between second and fifth grade that caters to the whole athlete and every element of the game.

FC Cincinnati consistently ranks among the top of the MLS, the most elite league for soccer in the United States. Participation in their NEXT program allows Joska to train in their facility, access to the latest in apparel, and entry to professional matches at TQL Stadium in downtown Cincinnati.

“I’m getting high-level instruction from top-notch former professional players and coaches,” Joska said. “I’m working harder than I ever have before. The coaching staff has very high expectations on the field and in the classroom; they keep a close eye on our grades, sleep patterns, and what we are eating.”

While his most revered accolade in the sport is making the academy team, Joska was also a Kentucky Olympic Development team member for two years and played in the Kentucky Premier League Village Cup with his SportsTutor team. He was also a member of a 3v3 LIVE National Tournament team that held the #1 ranking in the nation for several weeks.

His inspirations include Manchester City star Kevin De Bruyne and Liverpool coach Jurgen Klopp of the Premier League. He also admires Josh Head, a former Owensboro High School player who is a member of the U19 FCC Academy and serves as his mentor in the program.

Joska also expressed a great deal of gratitude to his coaches, who instilled a sense of passion for the sport and helped him maintain that fire over the years.

“Ty Stauffer at SportsTutor, Coach Armistead with Owensboro United, Coach Fusco at Kentucky Wesleyan, and my dad (Robin Joska), who has coached me since my early years,” he said. “I knew I loved soccer when I received my first uniform kit, a professional replica that I could wear and cheer for Lionel Messi playing La Liga for Barcelona – I was hooked.”