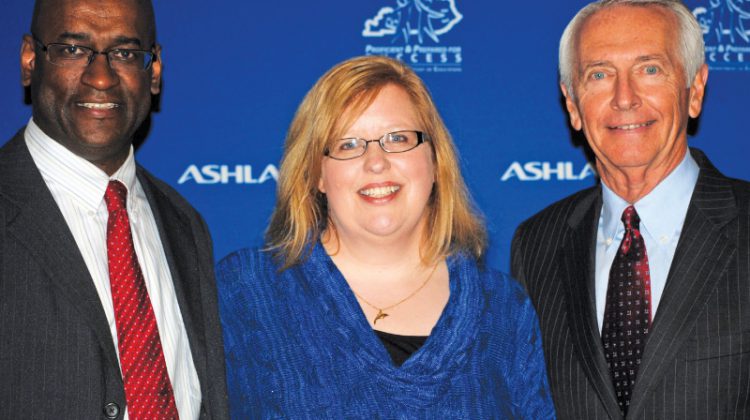 Heidi Givens didn’t always want to be a teacher for deaf and hard of hearing students. But an experience she had on the road to a very different career sent her down a path that would ultimately lead to the most rewarding career she could imagine and a POSITIVE, lasting effect on many students.

Heidi, this year’s winner of the Kentucky Elementary Teacher of the Year, had never even met a deaf person when she began her college education heading toward a career in Speech Pathology/Therapy. But through a series of serendipitous events, she eventually realized she was in the wrong college major. A requirement for an American Sign Language elective class led her to a preschool classroom for students who are deaf and hard of hearing. The students directed her around the room teaching her the signs for different classroom objects, and “I fell in love,” claims Heidi. When Heidi was a student at Boston University, another experience took her to the Perkins School for the Blind (where Helen Keller attended), and she visited the deaf/blind dorm after school. She was amazed watching the children play basketball and helping them with their homework, so the next semester she changed her major.

During her almost 18 years of teaching, Heidi has taught deaf and hard of hearing students in Massachusetts and Miami before moving to Owensboro in 2003. She spent the next eight years teaching at Country Heights Elementary School. There, under her leadership and that of the former principal, Debbie Crowe and current principal, Stacy Harper, a school culture that includes a “Sign of the Day” which is taught to the whole school and a school pledge which is recited in sign language every morning, has been firmly established. Currently, Givens is serving as the Itinerant Teacher for the Deaf and Hard of Hearing. Through this position she travels from school to school to service all deaf and hard of hearing students in the Owensboro and Daviess County school districts to meet the students’ Individualized Education Plan goals such as listening skills, reading, organizational and time management.

According to Tabitha Clayton, whose daughter Megan has been in Givens’ class from kindergarten to fourth grades, that culture is crucial because, “So often children who are deaf and hard of hearing are often the only ones in a school and feel very isolated.” Tabitha continues in a emotional voice, “Mrs. Givens helped us by getting resources, answering questions no matter what time of day, teaching ASL classes and giving so much of her own time on top of school hours.” Having Megan bussed from McLean County to Country Heights was scary for Tabitha who felt she had lost a sense of control in her child’s life, but she felt secure knowing that, “Mrs. Givens cared for Megan as much as I did, and that made it a lot easier for me.”

Stacy Harper agrees. “Heidi has established meaningful, on-going relationships with the families. She works to connect the families with community programs and services that will empower and benefit the students and the families. The families know that they can depend on Mrs. Givens to be an advocate for their students, both in and out of the school. Heidi has worked closely with several staff members in the program throughout the years. This collaborative teamwork approach is vital for the success of any students.”

When Heidi first learned she was nominated for the prestigious award, it was through an e-mail. Initially she was excited someone recognized her for her work and took the time to put in a nomination. She knew when she submitted her application that usually only general education teachers receive the award, rarely does a special education teacher. After filling out a rigorous application and writing the four required essays, she found out she was one of the top 24 teachers, eight each from elementary, middle and high school levels. Soon after, she discovered the field had been narrowed down to nine–three from each grade level– and she was one of them. The next step required Heidi to be observed and interviewed by three veteran teachers and to submit a formal lesson plan. Later she was notified she had been chosen as the Kentucky Elementary Teacher of the Year.

In winning this award, Heidi feels as if she has been “given the stamp of approval” that she has been doing the right thing all these years. “I don’t see my job as a ‘9 to 5’ job. In order for my particular student population that I serve to be successful in school, I have to impact everyone around them. These kids start out at a disadvantage and I have to do whatever I can to put them at a level playing field.” Robin Bush, the Director of Special Education for Daviess County Public Schools, says, “Heidi does a great job of advocating for the needs of students with hearing impairments. She is also very passionate about the needs and education of her students’ parents. Heidi thinks outside the box. She never settles for good…she always strives for great.”

Casey Hamilton is the mother of two blessings, a daughter and son (ages 10 and 6). She is the Education Coordinator and an instructor at Owensboro Community & Technical College.