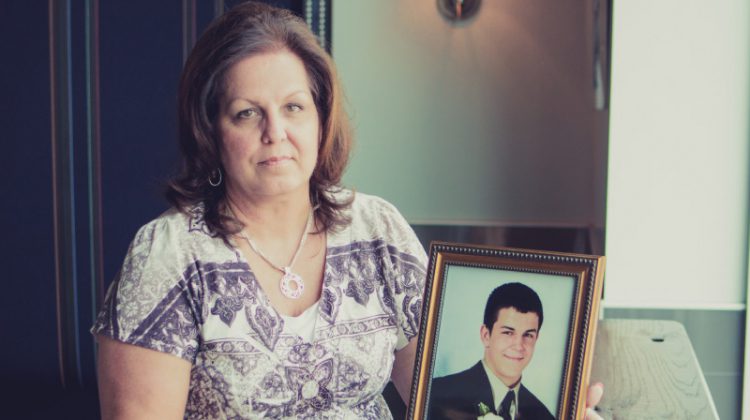 By now almost all of us have been affected by suicide in one way or another. National statistics show that suicides occur in different age ranges, race, gender, levels of popularity, socio-economic status, religious affiliation, and employment status. When a suicide happens, we all want answers. But often there seems to be no correlation or reason. However, many times people who complete suicide leave warning signs, if we know what to look for.
Survivors of suicide (those who have lost someone to suicide) know full well the pain and emotional chaos that suicide leaves in its wake for years to come.
“I just try to remember the good things about Justin,” explains Fran Evans of Whitesville, who lost her 17-year-old son, Justin, to suicide 8 years ago. “My faith in God helped me the most. At the time I couldn’t understand it. I read a lot of stuff on the Internet looking for answers. I needed to know why. What I did find was a stigma surrounding suicide.”
Now, Evans is a facilitator for the local S.O.S. (Survivors of Suicide) group.

“I got my facilitator training at the Link Counseling Center in Atlanta,” Evans said. “Our S.O.S. group meets the 2nd Thursday of each month at St. Joseph and Paul Catholic Church.”
According to the Daviess County Coroner, there were 12 suicides in Owensboro in 2010 and 2011. So far there have been 13 in 2012. The Owensboro Regional Suicide Prevention Coalition is determined to reverse the trend, and spends much time and effort raising awareness about the issue and training the public to recognize the warning signs so they can refer people to get help.
“I’m so happy we have the coalition to bring awareness through programs in the schools and out in the community through billboards and the Lifesavers Walk,” Evans said.

So what can we, as a community, do to help prevent suicide?
“Knowing the signs is crucial,” Evans says. “Parents need to be more aware of the signs of depression so they can help their teens learn how to cope when times get hard. I think every child needs to be talked to about depression. Justin was having problems, but we just thought it was something he could get through. A teen’s mind is still developing. It’s like they think everything is the end of the world. They need to be taught that it’s okay to ask for help and be encouraged to talk about their problems with someone.”

Know the warning signs.
Mike Flaherty, a certified psychologist and member of the coalition, explains: “We tell people in our workshops that you can recognize some warning signs of suicide by looking at the FACTS. F stands for Feelings: hopelessness, loneliness, worthlessness, extreme sadness, helplessness, etc. A is for Actions: recklessness, aggression, sudden use of alcohol or drugs, also talking about death or destruction. C is for sudden Changes in personality, behavior, sleeping and eating patterns, or lack of interest. T is for Threats; which could mean suicide attempts or verbal warnings, but it could also be more subtle, like statements or questions about death. If someone has made a plan, the risk becomes much higher. And S stands for Situations: a break-up, a recent loss through death or divorce, any change that seems overwhelming, and especially being exposed to suicide or death of a peer.”

Get trained in QPR.
The Owensboro Regional Suicide Prevention Coalition hosts QPR trainings throughout the year. QPR stands for question, persuade, and refer. More than just seeing “red flags” and warning signs, QPR trains people to talk with someone who is contemplating suicide and get them help immediately. Many of our local schools are requiring faculty, staff and parents to be trained in QPR. It’s a good idea for everyone to learn the basics of QPR because you never know when a family member, friend co-worker, or neighbor may be thinking about suicide.

Keep talking!
“I think we need to talk about suicide more to reduce the stigma associated with it and mental health issues in general,” said Amy Scott, a licensed clinical social worker at the Healthpark who lost her father to suicide. “We need to encourage people to become aware of signs of depression and ask the person about suicidal thinking. My father was the last person anyone ever thought would kill himself, but he did. Suicidal thinking isn’t a weakness or a lack of faith, it is a symptom of depression.”

Danny May is a husband and father of two boys. He is also the youth minister at Our Lady of Lourdes.